EMURGO Academy 101: The State of Blockchain Developer Salaries and Demand in 2022 However, each cycle also attracts new users to blockchain and crypto with new solutions and services.

One way to judge the overall strength of the crypto industry is blockchain developer demand.

If the blockchain industry is slowing down, blockchain developer demand should also decrease.

We can use this metric to judge the health of the overall blockchain and crypto sector so we can make an educated judgment on the future of blockchain and the greater Web3 movement.

The bright future of blockchain, crypto, and Web3

The developer and computer science industry regularly take surveys of what are the most promising fields for the future.

SlashData’s 2022 State of the Developer Nation Report conducted a survey of more than twenty thousand developers on various aspects of technology.

In it, they found that blockchain, NFTs, and cryptocurrency have the largest portion of developers learning about them, a bullish sign for blockchain, Web3, and crypto.

This indicates that computer programmers from all different sectors are moving towards blockchain technology in large quantities.

Roughly one-third of all the participants in the survey are currently studying blockchain applications, how to create NFTs, cryptocurrency implementation, and the like.

This shows that despite the current crypto market, developers are actively switching their careers to be in blockchain. The supply of future programmers in the space keeps growing for the entire industry.

Furthermore, according to LinkedIn, blockchain-related and Web3 jobs increased by 400% from 2020 to 2021 and were the most in-demand jobs as determined by open job listings within the overall tech industry.

Read more: What is Web3?

We can also look at blockchain developer salaries as a good metric to judge demand.

In a competitive market, companies attract people by offering them higher compensation than in other competing fields.

If the blockchain industry as a whole were weakening, salaries would also be falling.

The most recent data for this comes from Web3 Career shown below.

The site surveyed blockchain developers around the globe and compared the salaries by the following career experiences: entry-level (junior), mid-career (middle), and senior. 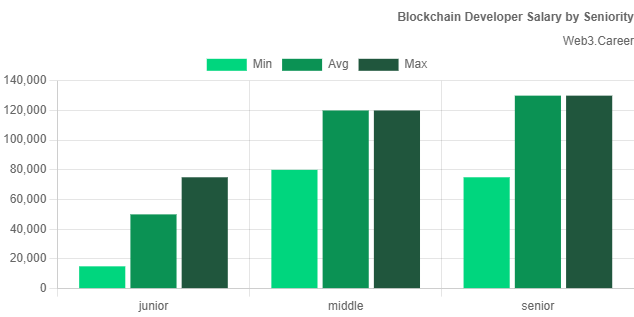 Projects all over the world keep demanding blockchain developers. This is pushing salaries up around the world. Developers from different regions that jump into the blockchain industry find higher compensation in it and more career opportunities.

Other sources put the average at  $143,000 per year or $73.33 per hour in North America. But the trend is clear, and it shows a growth in yearly compensations. Especially because the blockchain industry is particularly open when it comes to remote work, and has thrived by creating truly global teams.

Even through bear cycles, blockchain developer demand has remained strong. Blockchain and Web3 projects are focusing on building their products and delivering new solutions and services. This is reflected in the high demand for developers who can find higher salaries than in other industries.

It’s in the current market conditions that the projects of the future are made as everyone in the industry “BUIDLs.”

These cycles allow the blockchain and crypto industry to filter the projects and investors who are serious about the technology from those just taking advantage for short-term gains. In terms of Cardano, there are now more than 3.9 million active ADA addresses globally and more than 3,200 Cardano Stake Pool Operators (SPOs) who handle Cardano’s block production with more than 70% of Cardano ADA currently being staked to secure the network.

Read more: How EMURGO Academy prepares you for a career as a blockchain developer

Become a Web3 and blockchain developer now with EMURGO Academy

EMURGO Academy is the education arm of EMURGO, the official commercial arm and a founding entity of the Cardano blockchain. EMURGO Academy currently offers six different online blockchain courses carefully curated for all student types, including ones with technical and non-technical backgrounds.

Upon course completion, all students can develop applications on the Cardano blockchain. For those taking a business course, students will be taught everything from the basics to what you need to know to upskill your professional career.

EMURGO Academy’s courses are taught online and can be adjusted to meet the scheduling needs of working professionals.

EMURGO Academy can also help students connect with blockchain and Web3 projects in the Cardano and blockchain industry for potential jobs.