Advance your career into blockchain with EMURGO Academy

Click here to pick the right EMURGO Academy blockchain learning course for you!

These days, there are many companies and blockchain projects offering jobs for prospective talents with Web3 work experience.

Blockchain serves as the foundation technology for applications in NFTs, DeFi, wallets, and many more, highlighting the need for blockchain education.

Many blockchain networks these days put their interoperability properties front and center, but this was not always the case.

In the early days of the blockchain industry, many thought that only one blockchain would survive and the rest would disappear.

The “Strong Protocol” theory states that only one protocol would serve the needs of the entire globe. This idea came from comparing the evolution of TCP/IP and early Internet days to what it is today.

TCP/IP is the communication protocol for the entire Internet.

Every country on the planet uses it to set up their Internet infrastructure.

However, during the days of the early Internet, there were many competing protocols, and not all of them were able to operate with each other.

In the end, only TCP/IP survived, and became the standard for the industry.

Given this precedence, many in the early days of the blockchain industry believed blockchain protocols would also follow a similar pattern.

Yet, this idea is increasingly losing traction and the prevailing thought is that several blockchain protocols will be active in the future.

The Early Days of Interoperability

Even in the early days of the blockchain industry, developers were already designing ways for different blockchains to communicate and exchange assets with each other.

One of the first examples of this technology were Atomic Swaps.

Atomic swaps, sometimes known by the name atomic cross-chain trading, provides a way to trade two cryptocurrencies in a peer-to-peer manner from different networks directly without the requirement for a third party, like centralized exchanges.

The main condition for this type of swap is that it has to be processed within a limited time window.

The way this is done in Bitcoin is by the introduction of one of the first types of smart contract named Hashed Timelock Contracts (HTLC).

A HTLC is basically a timer that uses hashes to ensure that the transaction is completed within the set timeframe.

If the time runs out before the swap is completed, the operation reverts to its original state.

There are two types of Atomic Swaps:

How do cross-chain swaps work?

The way an on-chain Atomic Swap works between two participants Alice and Bob follows the below sequence: 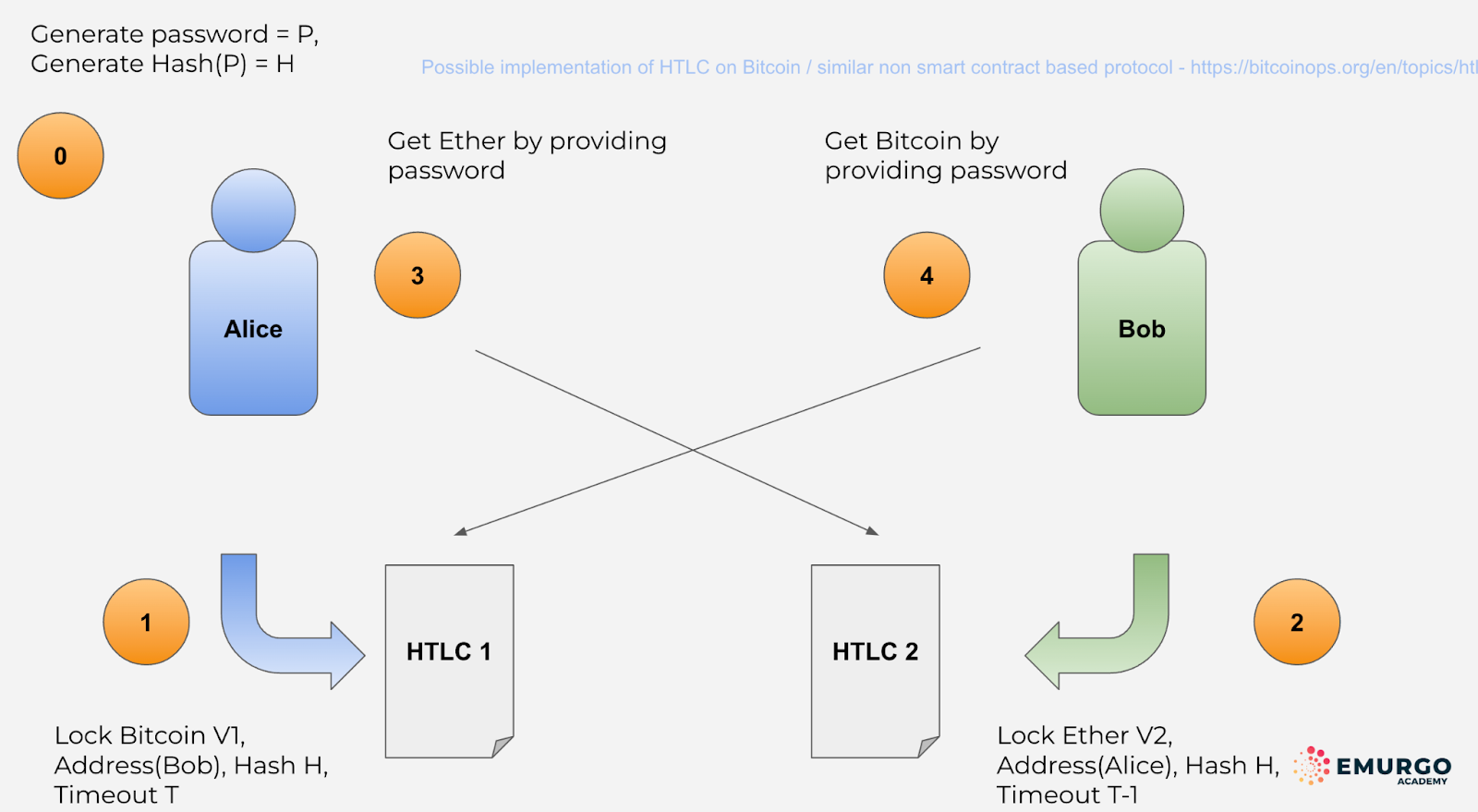 In the illustration above, the second participant can see that the cryptocurrency sent in the original transfer was claimed. Now the user is able to access the password that can release the cryptocurrency on this side of the operation. The entire process is restricted by the HTLC contract.

The Atomic Swap was the first example of blockchain to blockchain communication. As it allowed users to exchange their cryptocurrencies on-chain without using exchanges and other third parties.

The launch of Ethereum and tokens changed the industry. Now more assets were created on a blockchain, and there were more requirements to move those assets between networks.

What are Layer 2 Swaps?

State channels are characterized by not using block confirmations or taking space within the blocks of a network.

These can be used to trade two different cryptocurrencies peer-to-peer several times before closing the channel.

By doing this, the participants can trade freely with considerably lower costs.

A blockchain bridge, other times called a cross-chain bridge, connects two blockchains and allows users to send crypto assets from one chain to the other, thereby allowing for the migration of cryptocurrencies, tokens, NFTs, and other information between two networks.

Blockchain bridges are able to transfer more than just assets, like smart contracts information and sending data, but they are used most often for token transfers. This means taking an asset native to a network and moving it to a different one. Even when the other blockchain has a completely different design such as another consensus algorithm, block size, block confirmation time, etc.

Bridges can also move information regarding smart contract computations, hashes, and other things. They are crucial to keep the blockchain industry connected with each other. They are increasingly becoming an integral part of any network.

One possible downside of using blockchain bridges is centralization. Users have to give control of their assets to the party controlling the bridge to move them to the other chain. Bridges are controlled by an entity or group of entities, for that reason sometimes they are called federations.

These federated bridges are in charge of wrapped tokens like wBTC or wETH. These are the tokens that result from taking a cryptocurrency, coin, or token and locking it in a smart contract. They are a representation of the locked value and most times, that service is centralized.

Centralized bridges are fast and relatively cheap to use as an option when moving crypto assets from one network to another. That is the tradeoff when using one of these services. Many bridges are not as secure as they should be, and it’s important to research them well before committing any assets in a transaction.

There are decentralized bridges that use modified forms of Atomic Swaps. They are very difficult to design and can be technically complicated to use. Yet, they offer a higher level of security than the centralized ones, but with higher difficulty and in some cases cost.

Start a career in blockchain

Click here to find the right blockchain developer course for you! Everything you need to know about how Cardano blockchain’s Project Catalyst works. Read EMURGO’s July 2022 newsletter to learn about our highlights and the latest updates from the month.